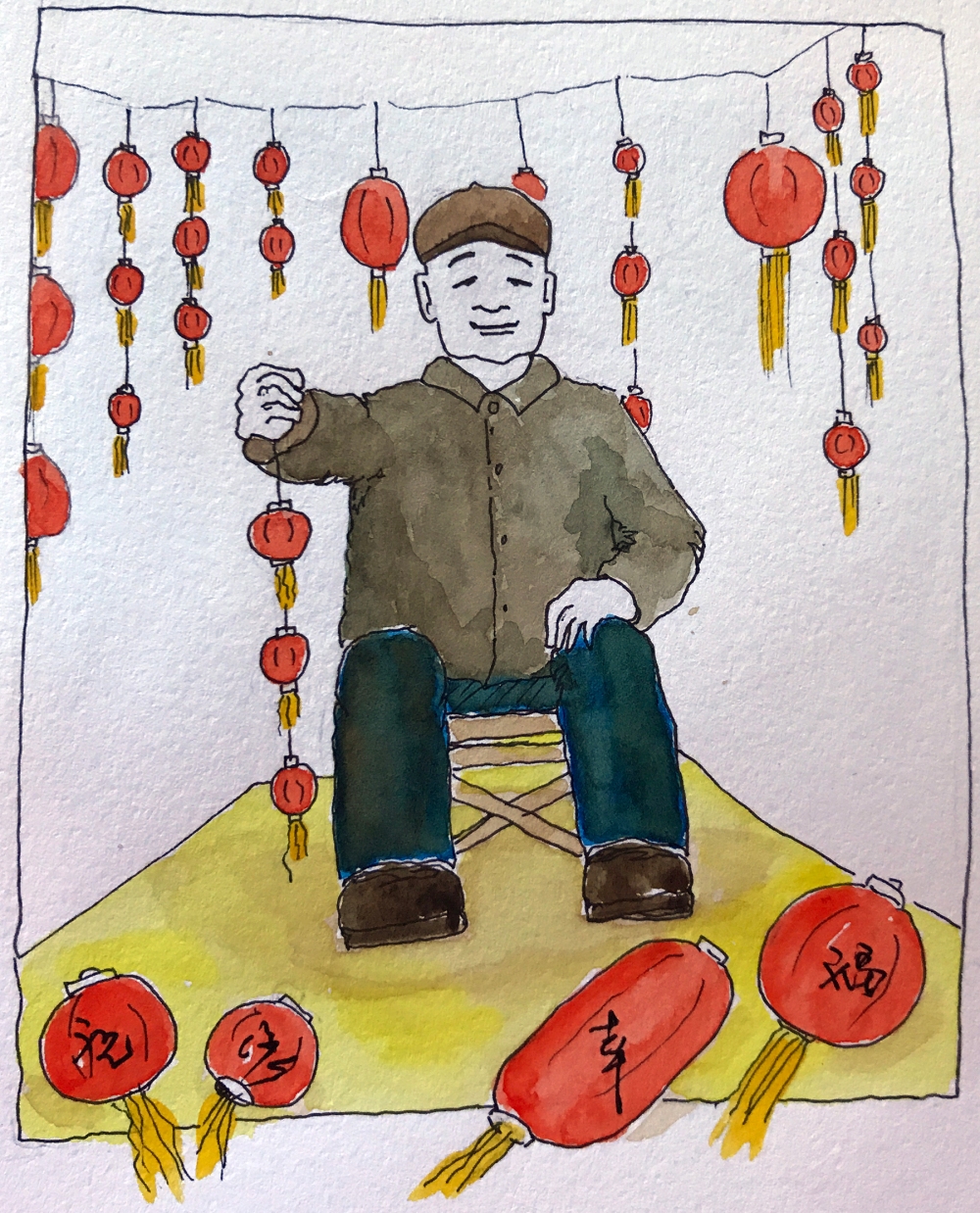 After traveling through much of the Shaanxi Province, I discovered its crown jewel…Hancheng; a perfect blend of ancient remnants juxtaposed with modern living.

This quaint (by Chinese standards) city of 500,000 (including the rural area) welcomes you with a blast of color on the horizon as you drive up the Jingkun Expressway, with enough neon and LED to qualify it as an Asian Las Vegas strip.

There are a number of modern hotels in the city core, called the Jincheng District, most within walking distance to the Ancient City of Hancheng, where you will find 1,500 year old storefronts abutting an inflated 40’ tall arched dragon bridge, wrapped in rainbow colored silk.

The sidewalks are dotted every few feet with intricately detailed, vibrant silk-wrapped characters, and thousands of colorful fans wave overhead. Yet the buildings and businesses themselves are mostly very old, having been handed down from generation to generation. Inside, you will often find these multi-generational families tending to the wares.

As I walked up Ming-Qing Street, a tourist stooped to pet an old dog sleeping on the sidewalk, up against a wooden half-wall. Inside, an elderly man came to the window and suspiciously looked down at the tourist. Noting that the tourist was with a group, the man shuffled out and slid the fence away, revealing a dark and dusty 100 square-foot shop, displaying only a few sodas, cigarettes and snacks…along with a limited display of one-inch carved Buddha’s.

A child sat at a miniature desk, pencil tightly gripped in her hand, and working in a notebook. Swinging feet clad in Mickey Mouse shoes that didn’t reach the floor stopped abruptly when she saw round eyes and light hair, wonder in her eyes as she took in the foreigner grinning down at her.

As soon as I left the store, the old man slid the fence back into place and watched me walk away, clutching my mini Buddha. Fascinating business plan.

Off of Ming-Qing Street, turn in at the Gourmet Food Court, where dozens of vendors sell local favorites, such as barbecued beef and lamb skewers, noodles, soups, stir-fries, fresh vegetables, breads, dumplings and my favorite…the “you gao,” afig-filled pastry, deep-fried and then sprinkled with sugar. The food court doesn’t accept cash…you must purchase a debit card in the Tourist Service Center (first booth on the right). It’s not labeled in English, but if you can’t find it, walk up to any booth and before ordering, flash some cash and they’ll direct you. I’d put 70 to 100 Yuen on the card per person…they’ll reimburse whatever you don’t use when you’re finished.

For the hearty hikers (there are also buses and shuttles available), veer to the left at the rainbow-covered bridge (it’s a dragon’s mouth at the other end) and a steep cobbled road takes you up to the Mongolian Pagoda, where birdcall competes with the ringing bells perched on each corner of the pagoda. From here you can view the entire city, and on clear days see the Yellow River to the east.

Continue down the north side from the pagoda, and down another steep cobbled road (unnamed), and you’ll arrive at Dang Jia Ancient Village (which sounds like “downtown” when they pronounce it) where you’ll find 360 homes built in the Yuan Dynasty of Chinese history. Only twenty families still live in Dang Ancient Village, and these are primarily the old timers who don’t what to move away from what they’ve always known. Thankfully, the government has decided to preserve this small gem of a community…throughout China almost all of them have been demolished and replaced with hi-rise apartment buildings. Hancheng is famous for the preservation of old buildings and there are over 100 old villages similar to Dang.

This is the largest, oldest and best preserved village in Shaanxi, and you’ll see some beautiful ancient carvings in stone, wood and even brick.

There are a handful of authentic farmer restaurants in Dang, and an inexpensive place (there is no signage or name, it’s at the bottom of the hill when you enter Dang Jia) offered a meal that was among the best I had in China, particularly the stir-fried leek dish and their bread, a traditional Chinese pancake which has a soft dough in the middle and is slightly crunchy on the outside, seasoned with the perfect amount of salt.

Also within walking distance in the Jincheng District, you’ll find three temples well worth a visit due to their history, architecture and art: Confucius (the third Temple in China), Town God and Dongying. The City Museum and Huangmiao Ancient Street are also close by, where you can find bars, café’s, tea houses, restaurants, souvenirs…and on some occasions…local performances.

Sima Qian Mausoleum Temple is a worthy bus or taxi ride away, and sits on the banks of the Yellow River with stunning views. Qian was an historian of the Han Dynasty (202BC-220AD) and this attraction houses over 1,700 years of cultural and historical relics…including Qian’s cenotaph.

You’ll need to take a taxi (15 minutes from Jincheng District) toget to the daily Farmer’s Market, located in the urban area of Hancheng. The site was constructed in 2015, and the market hosts more than 300 vendor stalls, selling mostly handmade or homegrown items, such as produce, seeds, meats, noodles, clothing, soups and so much more. Open every day from 7:00 am to 12:00 pm, the vendors are friendly and most don’t speak English but will happily bag up anything you point to, and often ask to take your picture.

Major crops in the region are apples (extraordinarily sweet, almost tasting like a cross between a pear and an apple), dates (known here as jujubes, and enormous; very sweet with a thin skin), hot peppers and livestock.

The City of Hancheng sponsors an annual Light Show, on display from February through May…though I can’t imagine a more elaborate show than the one we had during the off-season. I’d guess it’s quite spectacular.

Hancheng is a great day trip from Xi’an…both buses and trains will transport you…but I’d recommend giving this ancient city at least two days of exploration.

For my visit to Hancheng, I stayed at the Wenyuange Hotel in the Jincheng District, where the rooms were spacious and clean, and my room had a nice view of the entry road and all of the illuminated trees winding down to the hotel. This four-star hotel has two restaurants, along with a large indoor swimming pool.

The seasons and weather run pretty parallel to California’s Central Coast, so it’s easy to pack for your trip.

And do plan to be a celebrity. I was asked to be in dozens of selfies (with perfect strangers!) while in Hancheng. Young, old and in between…everyone was curious about the foreigner strolling through town, and I was happy to oblige.